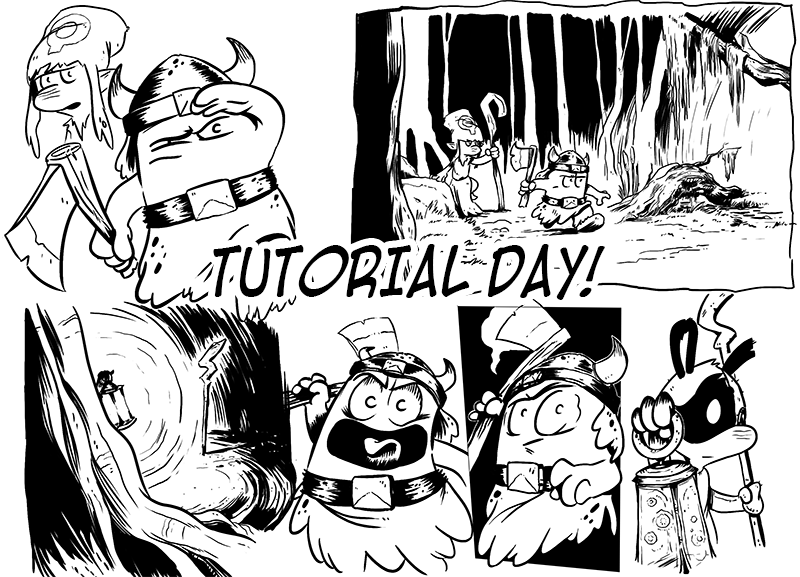 I got a question about how I make these. I’m just learning, but I figure, while it’s fresh, if I can help someone else starting out get into it easier, then that’s a good thing.

Bear in mind, of course, that I’m a complete amateur, and just bumbling along – hopefully I won’t give any terrible, terrible advice that a pro would recoil from in horror.

Apologies if I lead anybody astray! I am still learning and probably do things wrong all the time, but I am getting better as I go, which I guess is the whole point.

Here were some questions I got, and I’ll try to answer them in sequence, and show examples.

So, as far as tools go, I do these all digitally with NO offline steps at all. I’ve considered several times doing them traditionally, then scanning, but it’s SO MUCH more work that way that I’ve balked every time. I’m inherently lazy, and if I feel like something could be done faster and with approximate quality another way, I’ll ALWAYS do that.

I DO do sketchbook work and offline inking, but only as practice and to work up characters. I use a red eraseable pencil (Prismacolor, a soft one), and a brush pen (Pentel) for inks. For every character I’ll draw the most extreme poses I can think of, try out clothes, expressions, and just try to get comfortable with them this way. Then I’ll ink a few key poses to try to get a sense of what kind of line weight I can do, and how few lines I can use to suggest certain things.

From then on, it’s all digital in Photoshop (CS6 right now, and there are good reasons for this) which I’ll talk about further along-

I use an Intuos 4 tablet. ( I believe they’re on version 5 now) This’ll run you from 200 to 400 bucks, depending on the size you get, but is worth it. It WILL take time to make a mental adjustment to not looking at your pen. This can be frustrating at first but is well worth the time invested. It is very important that you map your tablet properly to your screen – you want the same aspect ratio.

I have TRIED a Cintiq (borrowed) which lets you draw directly on-screen. At first, this was really cool, but eventually I went back to my tablet. Why? Well, the biggest reason is that the Cintiq was not as sensitive as the tablet, and it was MUCH harder to make light strokes, and to control a line from very thin to very fat. The sensitivity on the light end just was not anywhere near as good, no matter how much I fiddled with the sensitivity curves. Your mileage may vary. Apart from that, I just didn’t like sitting up over the thing or using its buttons. It was uncomfortable for me. Again, your mileage may vary. Everybody else on the planet seems to prefer a Cintiq. They are spendy, though.

I use Photoshop CS6, as previously mentioned. I WAS using CS2, but CS6 is SO much better, for a few key reasons.

I did the Photoshop subscription with a year commitment, so it’s 20 bucks a month. I figure before I even pay for a copy of Photoshop, they’ll have an upgrade, which I’ll automatically get. I also get to install it on two machines, Mac and PC both, which is cool.

Here are the key reasons I like CS6 over previous versions

As I mentioned just above, I use Frenden’s Brush set for Photoshop. I adore these brushes – I use the Pencil:Blue for sketches (and Red sometimes, especially if I need to tighten up an initial sketch and want to ‘find the best lines’ before inking ) and the Inker: Nib for inks.

I almost never scan anything, for the aforementioned reasons. I HAVE a scanner, but I hate using it, and am never happy with the gritty results of a scan, even ink. I think it’s worth the time to just get accustomed to an all software process, because it will save you much pain and suffering and increase your speed of work hugely, which for me, is a big deal in maintaining my motivation.

As I mentioned, I’m all digital, so I use Frenden’s Blue and Red pencil brushes (mostly blue ) to rough in a scene. I do NOT ‘finish’ the scene in pencil. I draw in ink. One of the advantages of a digital workflow is undo, so I will often just quickly redraw the line with my hand on the undo button. This makes the inkwork more spontaneous and keeps the lines ‘live’ instead of ‘dead’ and traced-feeling.

Here’s an example of a pencil layout for a page – and then the inks overlaid. 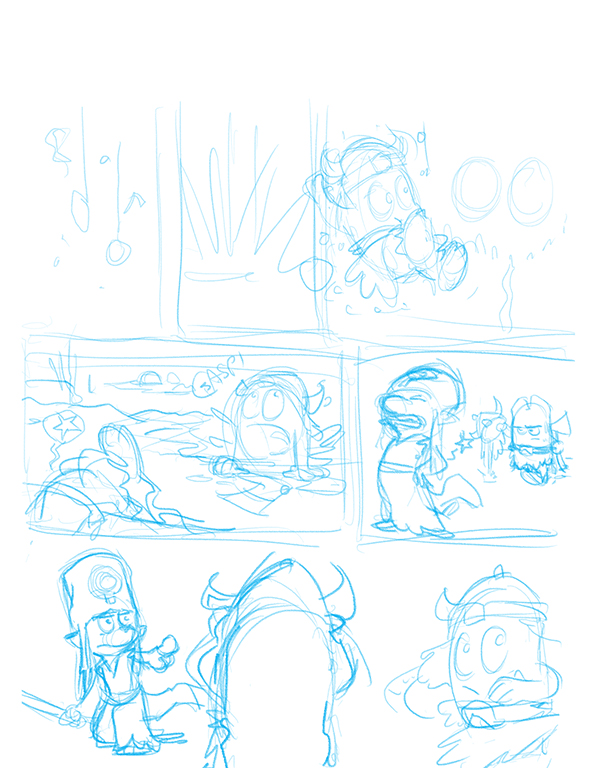 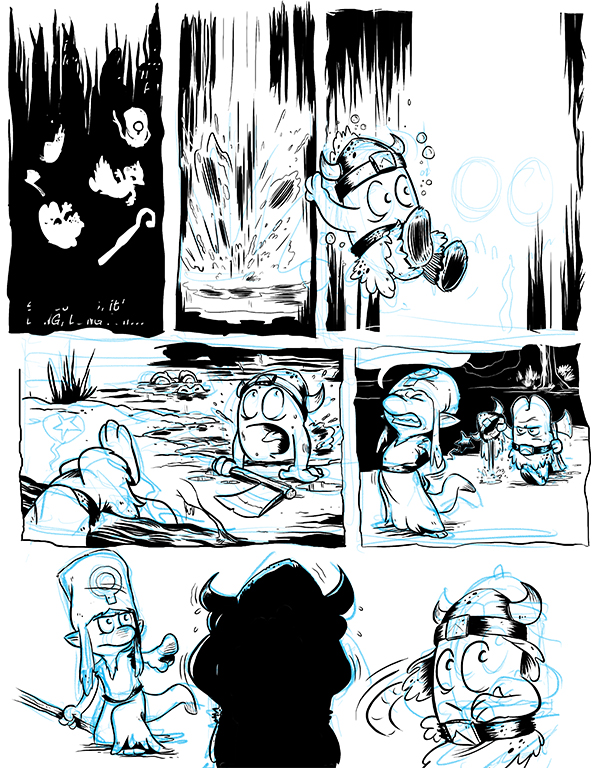 I try to get the longest continuous line I can in a single stroke. This isn’t always possible, and you will often need to join strokes, but if you can pull it off, you often get a much more pleasing line.
A bonus side-effect of this practice (redrawing a full line and trying to hold it as long as possible ) is that I have experienced a noticeable and rapid improvement in my ability to create the lines I want the first time.

6) Advice for newcomers who want to get into this and create their own?

For me, doing 4 panels on a schedule has been great. It forces you to complete a certain amount of drawing a day. I encourage you NOT to use templates or clone your pictures from frame to frame (unless it is part of the gag. ) Redrawing and drawing from different camera angles will build skill and confidence, and you will continually improve your linework.

Push for speed. Try to do things swiftly. The faster you can draw, the MORE you can draw, and the more you will learn.  Don’t waste time doing things you already know how to do well. Do things you are terrible at instead. Your general ability will increase along all axes this way.

Experiment stylistically. Look at artists you like, look at their lines, shapes, and compositions. Incorporate things you like, but not slavishly – try to do it from memory. Stuff will start to ‘stick’, but if you aren’t slavish, it will feel more naturally yours and will start to form a style that is unique.

Don’t feel like once you’ve started you’re ‘stuck’ with what you’ve done. Change it up. Constantly flex your style and try drawing objects you don’t know how to draw. The only way to get better is to be ambitious. Redrawing scenes you already know how to draw only moves the needle a little bit as far as your core skill.

I’m under the assumption that you’re learning, like me. This means you’re not drawing for posterity, so don’t be afraid to completely revise designs you have been using. The style police will not come to your home.

I hope this has been some help! If there’s some area you’d like more detail on, let me know. If I learn cool new stuff, I’ll try to say something about it too. I usually try to comment on wherever I am in the art process with the blogs I do with each new post.